Principles of Insurance with example

Principles of Insurance with example 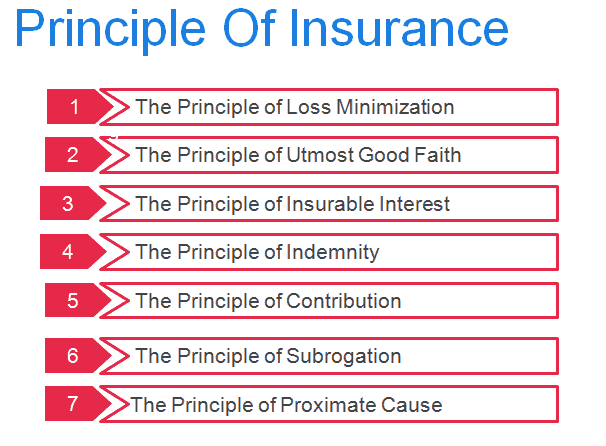 The example related to insurance fundamentals listed below.

The Principle of Loss Minimization

The user of insurance think to minimize financial and physical loss. The principle of loss minimization suggest that Insurer and Insured person think for the loss minimization. The insurance company wanted to provide best compensation and customer always try to avoid losses.

Example: Mr John has insurance for his car. He should not drive his car in influence of alcohol. He should make his best to avoid the accident. In every situation, he should try to protect his car against any loss and damage. He should not behave like careless with insured car.

The Principle of Utmost Good Faith

Example: Mr john has a habit of smoking. During health insurance premium check, he observes that for non-smoker the insurance premium is low. Mr. John has acted with sensitivity and reveal truth about his habit. Also, he has to disclose his past illness records.

The Principle of Insurable Interest

The Principle of Indemnity

Example: Mr. John took insurance for his car. After some time his car is lost during robbery at his home. The insurance company paid the amount to Mr. John. But in case the car is found, Mr john has given option to deposit money and got car Or else he will lose ownership of car.

The Principle of Contribution

Example: Mr John’s Car is year old and now valued at half of its price. Mr. John took car insurance and his car is damaged in an accident. The car insurance company will only process a claim of half amount as insurance is taken against half price. If the bill amount is greater than the insured amount, the remaining amount will be paid by Mr. John.

The Principle of Subrogation

Example: Mr. John took heath insurance of $10000. First-year he admitted to hospital two times. During the first time, his medical expenses were $9000. The Health Insurance company will pay the amount. But in the second health emergency, his bill is $2000, then only $1000 is compensated by the company.

The Principle of Proximate Cause

You can write Principles of Insurance with examples relating to your experience, your education & country. As i am working in NBFC, i have seen lot of benefits related to Insurance. In the uncertain time, insurance can help you to overcome burden. If you have any insurance policy on your name then you must read the policy to get maximum benefits.