Functions of Reserve bank Of India

“to regulate the issue of Bank notes and keeping of reserves with a view to securing monetary stability in India and generally to operate the currency and credit system of the country to its advantage; to have a modern monetary policy framework to meet the challenge of an increasingly complex economy, to maintain price stability while keeping in mind the objective of growth.”

The Role and functions of RBI include monetary management, foreign exchange and reserves management, government debt management, financial regulation and supervision, apart from currency management and acting as banker to the banks and to the Government. The Reserve Bank of India sole authorizer of issuer of Indian currency.

Functions of Reserve Bank Of India

Let’s discuss the official functions of RBI in details

The Reserve Bank of India also monitor the monetary policy. The RBI changes the interest rate to regulate money flow. The change in interest rate affect the Housing market and forex rates. The objectives of Monetary policies are control of inflation, controlling of unemployment rate and currency exchange rates.

Regulator and supervisor of Financial system

The RBI is regulator and supervisor of Indian Financial system. The RBI comes under jurisdiction of Ministry of Finance, India. The Regulator and supervisor of Financial system function’s objective is to maintain public confidence in the economic system. Also RBI protect money of Depositors. RBI provide cost effective banking service via certain regulation to the public.

The RBI look after banking system and work to strengthen Banking system.  They prescribes broad parameters of banking operations. The uniform rules formed for the Bank’s working in India.

They regulate the dealing & Holding of foreign exchange, Current and Capital account tractions (foreign currency). They facilitate the foreign transactions related to export and import of goods and service.

RBI is sole authority to destroys currency and coins not fit for circulation. They work for to give the public adequate quantity of supplies of currency notes and coins and in good quality.

RBI performance the performs a wide range of promotional functions. The RBI provide financial help for the agriculture activities. The RBI work for export credit to the traders. The priority sectors receive credit from the RBI. The RBI also provide the credit facilities to weaker sector to strengthen them.

Regulator and supervisor of Payment and settlement system

This 7 functions of RBI stated in official website. The reader can read further traditional functions of RBI, which may help you to understand more about Reserve Bank of India. 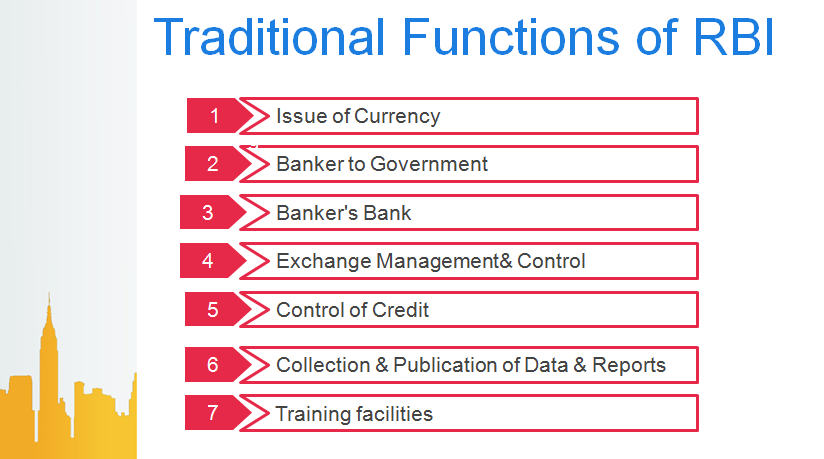 The Reserve Bank of India is regulatory body who regulate India’s Banking system. In another term, RBI is Central Bank. A central bank is an institution that manages the currency, money supply, and interest rates of a state or formal monetary union, and oversees their commercial banking system. The Reserve Bank of India was founded on 1 April 1935.

The Indian payment system is regulate by RBI. regulate the payment and settlement systems in India. RBI works for the financial development of the India. The official website of RBI is rbi.org.in.

The Reserve Bank of India is autonomous body. The functions of RBI gives broader idea of operation of Banking system. They provide rules and regulation for the money flow, banking operation, foreign exchange. It work for the economic development of India. RBI control the inflation rate.

RBI works as watchdog of Indian Banking system. RBI works as autonomous body but RBI Act, 1934 governing its operation gives the government power to direct it. Also the appointment of RBI Governor was done by Government of India.

If you have any queries related to functions of RBI then comment below. The information was updated on 18-01-2023.