What is Accidental Death and Dismemberment Benefit?

In insurance, accidental death and dismemberment is a policy that pays benefits to the beneficiary if the cause of death is an accident. This is a limited form of life insurance which is generally less expensive, or in some cases is an added benefit to an existing life insurance policy.

This benefit is included in Health Insurance or Life insurance policy. This benefit is provided by many insurance companies at added cost to your premium. Dismemberment includes the loss, or the loss of use, of body parts or functions.

There are many examples of celebrities who insured their body part. Because it is important in their earning money. Before buying dismemberment coverage, you need to understand the limitations. You should carefully read the terms of the policy. 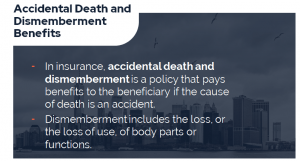 Understanding Of accidental death and dismemberment